Our Examiner Reports got a major overhaul in September, and we’ve improved them even further based on customer interviews to find out how they actually use Juristat, and we’ve shifted our design focus to better meet those needs. With that in mind, this guide will focus on the “what” and the “how” of Juristat Examiner Reports: what you can do with with them, and how our current customers do it.

Set and Manage Your Client’s Expectations

No matter what industry you’re in, setting client expectations is one of the most critical things you can do to set yourself apart as a service provider. Juristat Examiner Reports help you put your client’s mind at ease by making them feel like you’ve already thought of everything, thereby engendering trust by making it easy for you to back your strategy with unbiased data.

As a patent prosecutor, often facing long timelines between significant events, it’s vital to be able to refresh your – and your client’s – memory on your examiner’s behavior in general, and to be able to augment that with contextual data, relevant to the most recent event.

Based on customer interviews, we’ve added some new visualizations and improved existing ones to help make Examiner Reports more efficient at the outset and at key milestones. To illustrate, let’s walk through an Examiner Report for Examiner Anthony Mejia.

Average examiner timings are back on the reports, providing quick visibility into key timings (time to first office action is coming soon). This helps clients get a feel for how long things will take and can mitigate the need for constant client updates. 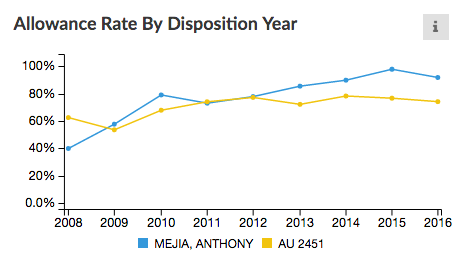 How Many Office Actions to Expect and How to Respond

Examiner Reports provide valuable information on your examiner’s past behavior. You can easily use our office action analytics to communicate the challenges your client’s application is likely to face. Let’s take a look at Examiner Mejia’s office action statistics and break down what they’re telling you:

Here we can see that Examiner Mejia averages 2.1 office actions per application – 28% fewer than his art unit, which averages 2.7. 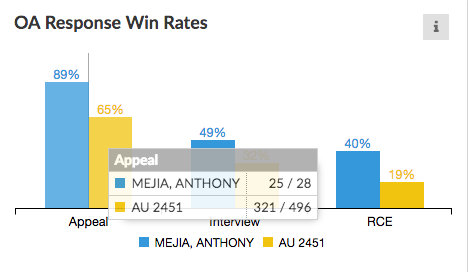 The OA Response Win Rates graph tells you what applicant response is mostly likely to be followed by an NOA, given it has at least one rejection. Historically, appeals are a winning strategy in front of Examiner Mejia, with 25/28 of those appeals leading to an allowance. Interviews have about 50/50 shot of being immediately followed by an NOA, and RCE’s a 40% chance. In general, this tells you that your examiner is more lenient than his art unit average.

The Dispositions by Rejection Count graph gives you even deeper context around whether you should continue prosecution if your application receives more than the average number of office actions: 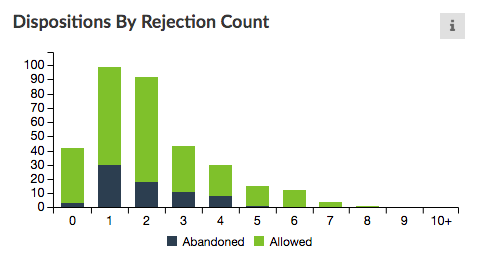 The Dispositions by Rejection Count graph is telling us that despite the average number of office actions being 2.1 (we can see clearly here that the majority of applications in front of Mejia are allowed by the 2nd OA), the percentage of allowed applications at each subsequent office action is still high. This could indicate that he’s pragmatic and willing to work with applicants to get the application allowed.

In fact, applications that made it to rejection number six or seven (16 apps total) have a 100% allowance rate, suggesting persistence pays off. In this examiner’s case, this graph is a great one to show clients who have a high priority application but are discouraged by a difficult or prolonged prosecution.

It can be a pain to get an examiner on the phone for an interview, and a client may not want you to spend the extra effort to prepare. Sometimes though, interviews can have a big impact on your prosecution. With this in mind, we’ve added a new interview metric to our Examiner Report: Effect of Interview on Allowance Rate. 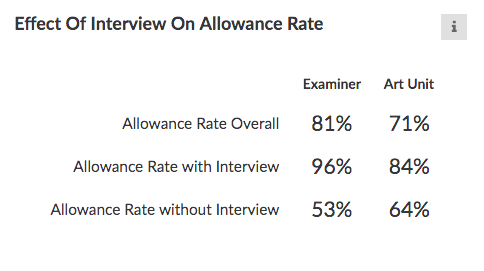 Sometimes it’s useful to know who else has faced your examiner. For example, we’ve had clients use our old reports to filter through applications or rejections and find out who else was facing a similar prosecution profile to their client, so they could put the client’s mind at ease that the challenging prosecution was typical for their industry. In the previous Examiner Reports, this was doable, but took a lot of manual work.

With the addition of the Frequent Assignees and Frequent Firms tables (above) – and judicious use of our filtering system at the top of the Examiner Reports – you can easily find out what firms and assignees face this examiner the most. Send your client two (or more) Examiner Reports: one for them, and one for a competitor or peer.

Here’s a sample of what it looks like when we compare Examiner Mejia’s behavior on Google applications vs. Microsoft applications: 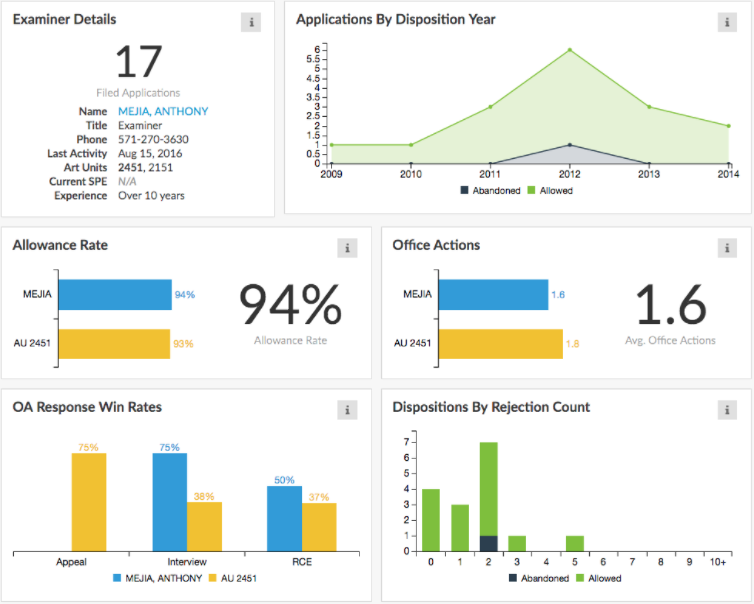 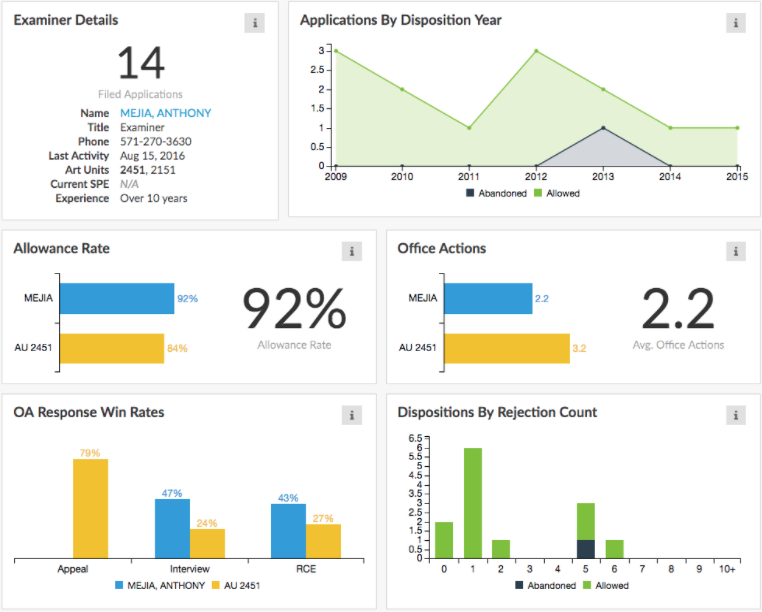 If you’re a Juristat Epiphany subscriber, you can click on the name of the firm or assignee to go directly to their Epiphany Report to view an in-depth analysis.

Appeals can be a slog. Some of our clients recommend that their clients avoid them like the plague, while others are masters of the craft. Using Juristat Examiner Reports, you can remove any irrational fear of filing an appeal, while gaining perspective on the size of the challenge in front of you.

Before we even look at our appeals visualizations, what do we already know about appealing in front of Mejia? From the timeline stats at the top of the report, we know that if the appeal doesn’t go to PTAB, we’re only looking at 7 months on average of additional prosecution time. Not too bad, right?

But if the appeal does go to the PTAB, we’re looking at an additional 39.1 months to a PTAB decision. That’s almost double the average prosecution time for Mejia, and should give you pause. This metric gives you valuable context for the detailed appeals data below. Unless you’ve been given a must-win application, your hope would be that appeals in front of this examiner go to the PTAB infrequently – and are an ace-in-the-hole for applicants – before you recommend an appeal to your client.

As a quick aside, recall our Dispositions by Rejection Count graph. In Mejia’s case, despite appeals being, on average, a winning strategy for the applicant, simply amending the application appears to be a sure thing. In fact, depending on the incentives your client is facing, you could make the argument that interviewing and amending is the safest and most successful strategy with Mejia.

See how we’re building context around prosecution and making richer decisions by pulling in seemingly disparate data? That’s the real power behind Examiner Reports. Once you get comfortable interpreting them, you’ll find these strategic insights come almost automatically.

Okay, back to appeals. Given the context from our high-level timeline averages, let’s see how appeals before Mejia look under the microscope. The new appeals graphs make it simple to view the outcome breakdown of appeal strategies and PTAB decisions. Recall our Office Action Win Rates graph from earlier: appealing is a successful strategy against Mejia. Now we can dig a little deeper and see our best path forward.

Should we go for the pre-appeal brief conference? Maybe. Forty percent of the cases have resulted in examiner reversal, which isn’t bad, but there are only five decisions to look at. If we take a look at what’s happened on standard appeals, we can see that Mejia has withdrawn his rejection 50% of the time, and the vast majority of his apps that have gone to appeal went this route (28/38).

Scan down to the appeals overview graph to see more detail on the breakdowns. You'll find that the majority of appeal outcomes favor the applicant in some way.

This is just an example of how you can use Juristat Examiner Reports to quickly assess the examination style of your examiner and to inform your strategy and client communication. Next, we’ll dig into some of the advanced interactive features and tools in the Examiner Reports, all designed specifically for patent attorneys, with the purpose of enabling data-driven research at an even deeper level.