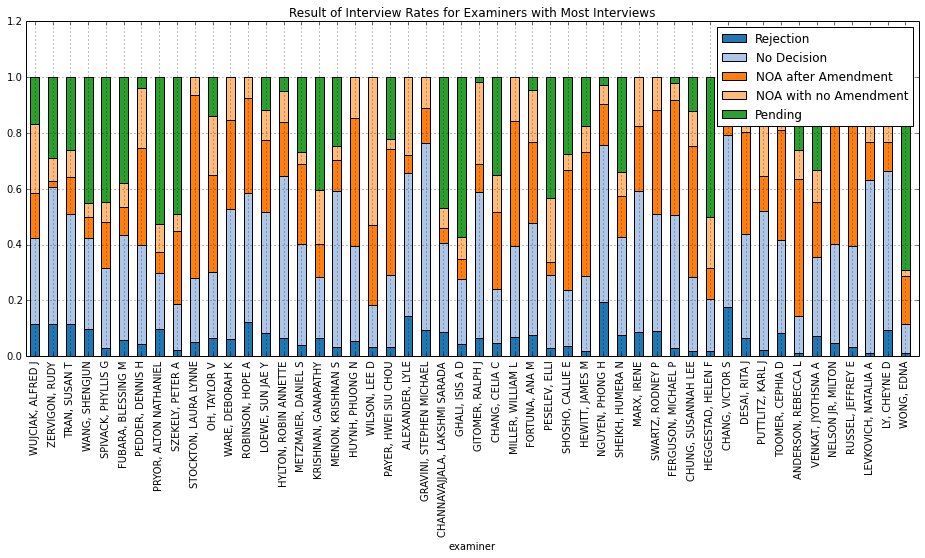 Juristat conducted an analysis which reviewed trends in examiner behavior immediately following an interview with the applicant. Specifically, we calculated the percentage of examiner interviews after first rejection that result in NOA with amendment, NOA w/o amendment, rejection, or no decision. What we found is that particular examiners often heavily favor one outcome over another. The data shown in this blog post is the result of analysis across our entire dataset. We do not factor art unit or time periods into our calculations. We only use examiners who are listed on more than 100 applications and who have had at least one application with an examiner interview after first rejection. Therefore, our normalized sample consists of 6556 examiners. From that pool we calculated the following statistics:

The mean number of interviews is 20, but half of all examiners have fewer than 16 interviews, which means the examiners who conduct the most interviews make up the majority of all interviews conducted, somewhat skewing the results.  Moreover, this finding is indicative that a lot of examiners haven't had enough interviews to give us a good idea how they trend in their decision making. Consequently, we cleaned our data by eliminating all but the top 25% examiners by interview count, further normalizing our sample size to 1635 examiners. The chart below shows the top 50 examiners by number of interviews and the rates on which they rule after examination.  Our goal is to identify how specific examiners are biased in their decisions following interviews. Our first chart shows examiners who have had the most interviews. Examiners on the left have more interviews than those to the right. From this chart it appears examiners return a good mix of results with maybe some bias to no decision and NOA.

An interesting picture arises when we order examiners by rejection rate. First, even the highest rejection rates are lower than one would expect for responding to an office action. Second, this group with the highest rejection rates are almost always even more likely to simply provide no decision following an interview, meaning they will force the applicant to file an appeal or RCE before they will hand down another allowance or rejection. This isn't to say these "no decisions" do not make scheduling an examiner interview worthwhile. In many cases it is useful to schedule an examiner interview in order to better under an examiner's perspective, and at other times an interview may increase the probability of allowance after filing an RCE. Nevertheless, as a general rule, examiners interviews may not be worth the time and expense before this particular group of examiners.

With that said, there are a number of examiners who grant allowances following an interview as long as you are willing to amend your application. Oddly enough, the allowance rate for this group is less than the previous cohort allowing applications without an amendment. Which makes one wonder whether that last group may represent examiners who are filing rejections to get their counts up, but then turning around and providing an allowance with little effort on the part of the applicant following the rejection.

As a final disclaimer, please remember that the analysis is not based on a complete dataset. However, we did analysis a significant number of interviews (70,060 in all), and our data set includes the 75th percentile of examiners based on number of interviews conduct (1,635 examiners in total). It is clear that patent prosecutors as a whole are not conducting enough interviews, though having the data on the relative impact an interview with an examiner may have is extremely helpful when deciding whether or not an interview is worth the time and expense.

President Calls to "Strengthen Our Patent System and Foster Innovation"