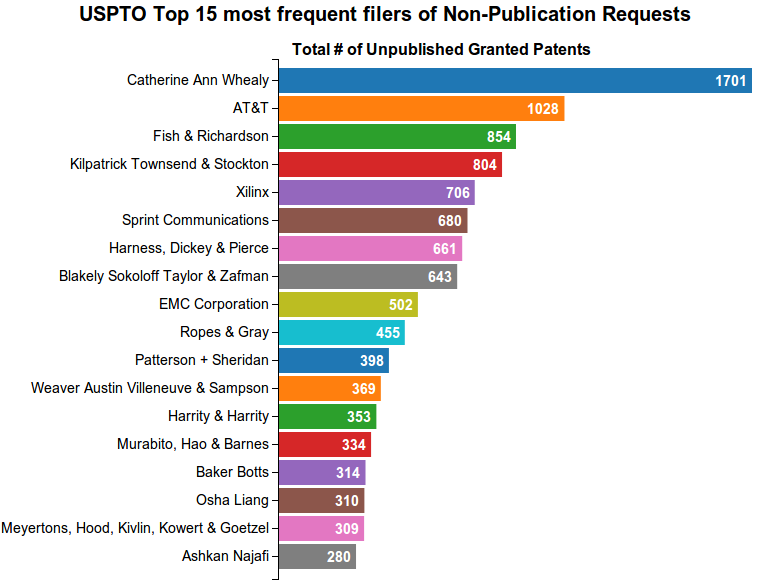 Our analysis is based on a sample of 2.5 million patent applications filed from 2001 to today. Obviously, we cannot tell you every application that is filed as non-published, since many of them are rejected, abandoned, and then never published. However, we can use the applications that were filed under 35 U.S.C 122(b)(2)(B)(i) but eventually granted as a proxy for total non-published filings.

It’s worth noting that this list does not directly correlate to firm size or a firm’s quantity of applications filed. For example, Oblon, Spivak, McClelland, Maier & Neustadt, LLP doesn’t make the list despite filing more utility applications than any other firm in 2012 and 2011. Meanwhile, a solo agent, Catherine Ann Whealy, blows whole firms and Fortune 500 in house counsels out of the water for filing non-publication applications that are eventually allowed.

This isn’t to say firms that aren’t on this list are falling behind. Choosing whether or not to file a non-publication request is a strategic choice made by the patent prosecutor and applicant, and there are advantages and disadvantages to each option. Often, there is little value to requesting an application not be published and in recent years the prosecutor and applicant frequently have no choice but to publish because of the existence of or potential for a foreign filing or PCT application. Finally, it appears that the choice to file a non-published application appears to occur more frequently in fields with high competition such as biotech, especially seed utility patents, and telecommunication inventions.