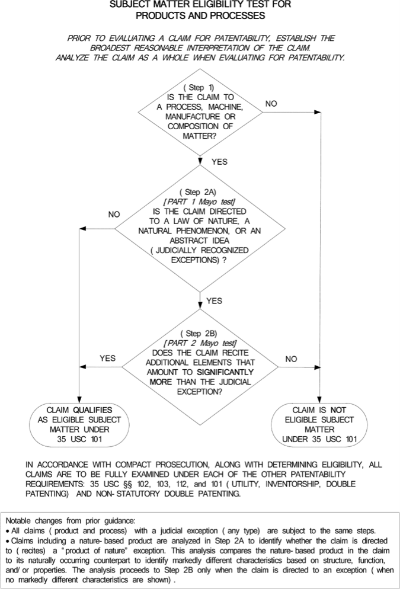 The USPTO has issued new guidance on subject matter eligibility under § 101. The document, entitled “2014 Interim Guidance on Patent Subject Matter Eligibility” (Interim Eligibility Guidance), comes in the wake of the recent Supreme Court decisions in Mayo, Myriad, and Alice Corp. that have shaken up the way patent examiners determine if an idea is patentable. Prior to the Interim Eligibility Guidance's release on December 15th, patent examiners relied primarily on two documents released earlier this year: (1) the Myriad/Mayo guidance issued on March 4th; and (2) the Alice Corp. guidance issued on June 25th. The new document supplements the latter and supersedes the former.

The new guidelines aim to detail a more cohesive approach. According to Commissioner Peggy Focarino’s blog post: “[T]he guidance reflects a significant change from the examination guidance previously issued in response to Myriad and Mayo. The changes were triggered by the feedback we solicited and received from the public, as well as refinements necessitated by the Alice Corp. decision.”

OVERVIEW OF THE NEW GUIDANCE The new document begins with an updated flowchart detailing the process for determining subject matter eligibility:

Following the flowchart, Part I explains the two-step analysis for judicial exceptions (represented in the flowchart by steps 2A and 2B). Part II instructs examiners to perform a complete examination of all patentability requirements, even if a § 101 rejection is made. Part III walks examiners through six sample analyses based on the new guidance. Finally, Part IV provides summaries of important cases dealing with laws of nature, natural phenomena, and abstract ideas.

Step 1 of the above flowchart reflects the process for determining whether a claim is directed to patent eligible subject matter as laid out in MPEP § 2106(I). Steps 2A and 2B represent the two-part analysis detailed in Mayo and used in Alice Corp. Specifically, Step 2A requires a determination of whether the claim is “directed to” one of the judicial exceptions, i.e., a law of nature, a natural phenomenon, or an abstract idea. Previous guidelines asked whether a claim “involves” one of the judicial exceptions. Step 2B directs the examiner to determine whether any element, or combination of elements, is sufficient to ensure that the claim amounts to “significantly more” than the judicial exception.

The new guidelines make clear that the Mayo test applies not only to laws of nature, natural phenomena, and natural products (as it was limited by the March 4th memo), but also to abstract ideas (as required by Alice Corp.). At least in this respect, the Interim Eligibility Guidance does not represent a significant change from the Alice Corp. guidance. However, the new “directed to” language should prove less restrictive than the “involves” standard. Moreover, by superseding the Mayo/Myriad guidance and providing better examples, the new guidance outlines a more cohesive framework for determining eligibility. For more on the changes included in the new guidelines, check out Law360’s in-depth article on the subject.

EFFECTS OF THE MAYO/MYRIAD GUIDANCE Following the Mayo/Myriad guidance, entitled “Guidance for Determining Subject Matter Eligibility of Claims Reciting or Involving Laws of Nature, Natural Phenomena, & Natural Products,” relevant art units have shown a significant increase in § 101 rejections. As shown below, the effect is particularly apparent in those art units dealing regularly in biotechnology and organic chemistry. 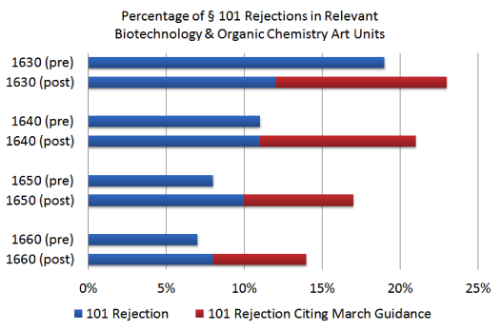 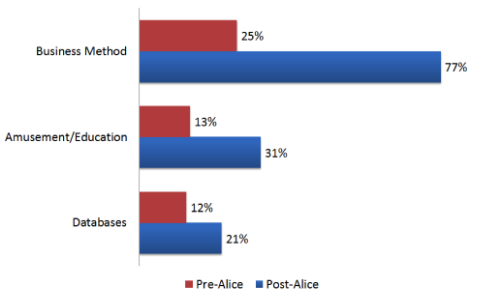 Looking specifically at the business method art units, we see that the number of rejections based on § 101 increased from 25% before the Alice Corp. guidance to 77% after. That’s a 52% jump.

As for the new guidance, its effect won’t be seen for many months. While we can’t be sure, we suspect it will lessen the applicability of Mayo, Myriad, and Alice Corp. According to Ryan Davis at Law360: “[T]he guidelines will allow more inventions to be found patentable than would have been the case under the March version.” Juristat will be monitoring the effects in the coming months, so stay tuned.

ADDITIONAL CHANGES LIKELY Further changes also remain possible. The new guidance outlines a 90-day comment period ending on March 16, 2015. All written comments must include: (1) the name and affiliation of the individual responding; and (2) an indication of whether comments offered represent views of the respondent’s organization or are the respondent’s personal views. All comments will be made part of the public record and can be sent to 2014_interim_guidance@uspto.gov.

Be sure to check our blog in the months to come for the most up-to-date information on the effects of the Interim Eligibility Guidance.