Roses have always been associated with Valentine’s Day, but who knew they were also significant in patent history? The first plant patent ever granted was to a Mr. Henry F. Bosenberg in 1931, roughly a year after plant patents became legal. Mr. Bosenberg intended to lengthen the amount of time that a climbing rose would bloom in order to match the longer blooming period of non-climbing roses. 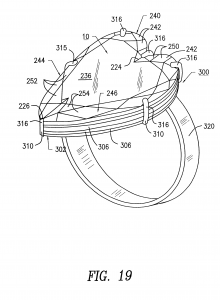 For those with more refined tastes than singing greeting cards, thank Ami Haimoff for patenting a new way to make heart-shaped diamonds in 2002. The process actually involves cutting two pear-shaped diamonds and placing them side-by-side in a setting in such a way as to create a heart shape. Though it may be hard to resist the allure of the dull brown chocolate diamonds, try a heart-shaped one for your sweetheart this year. 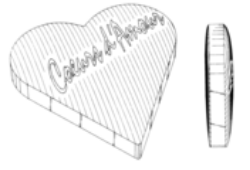 Chocolates are by far the most popular Valentine’s Day gift, so its no surprise that there is a large market for heart-shaped chocolate around this time of year. Although one would think that a patent on such an item would be beyond obvious, Verlooy Herwig obtained a design patent on heart-shaped chocolate in 2001. Remember that when you’re running to Walgreen’s at the last minute to pick up the biggest box of chocolates you can find. 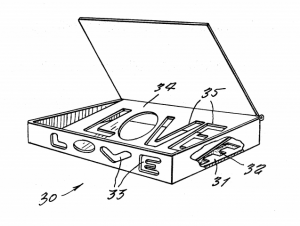 Principally intended as a device to separate the feeble-minded from their money (but marketed as a token to be used between lovers), the Love Box is filled with love and can never be emptied. To get a little love, open it for a short time. To get all of a person’s love, leave it open all the time. This most useful of patents was obtained by Dale A. Ledman and George Spector in 1980.

Basically a Valentine’s Day Chia Pet, the heart-shaped, free standing, living horticultural plants were patented on February 19, 1991 by Gene L. Howe, sadly a few days late for Valentine’s that year. Like the heart-shaped diamond, it is actually two separate plants whose trunks are bent together in the shape of a heart—no trellis needed! It probably would’ve just been easier to go with roses, but one has to admire Mr. Howe’s determination. 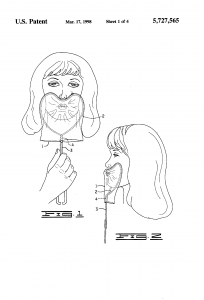 The kissing shield patent was granted to Deloris Gray Wood in 1998. Described as conferring a benefit similar to barrier contraception, the kissing shield is a device that allows the user to kiss people without having to worry about the spread of germs and diseases—most importantly, the patent states, from HIV and AIDS. Yes, you read that right. Imagine all of the lives that could have been saved if Ms. Wood had only thought this up sooner! 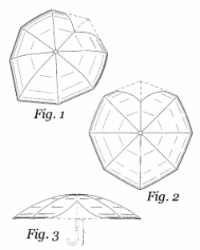 For most of the country, February can bring some pretty unpleasant weather. Make sure you’re prepared to keep your head dry AND celebrate Valentine’s Day with this heart-shaped umbrella, the patent for which was granted to Nick Clarke in 2009. We just knew lawyers were good multitaskers. 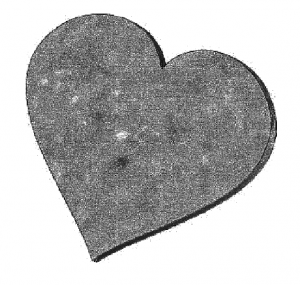 For some, there’s nothing better than a “takeout and makeout” session. Fortunately, William C. Arbaugh II brought us the heart-shaped pepperoni slice in 2004 so that introverts everywhere could also celebrate Valentine’s Day. This year, why not grab a pizza and some cold beer and have a nice quiet evening at home with your sweetie? 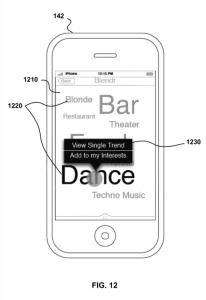 (10) Systems and methods for providing location-based cascading displays (US Patent No. 8,606,297)

The patent for one of the earliest location-based mobile dating apps was obtained by Joel Joseph Simkhai, Scott Ryan Lewallen, and Morten Bek Ditlevsen in 2013. The original assignee of the patent was Grindr, which has inspired a number of similar dating apps, most notably Tinder. No date this year? Don’t worry. Head on over to the app store to get things started.

February 12 (two days before Valentine's Day), is Abraham Lincoln's birthday. Most are familiar with Lincoln because of his extraordinary efforts to keep the United States together during the Civil War, and he is often cited as our greatest president. However, he is also famous in patent law for being the only US president to ever have obtained a patent. In fact, he even practiced patent law early in his legal career. On May 22, 1849, Lincoln obtained US patent number 6,469 titled "Buoying Vessels Over Shoals." The device was conceived  as a mechanism to lift boats over shoals and other obstructions using large inflatable bellows attached to the sides of a boat. More than simply obtaining a patent and practicing intellectual property, Lincoln was a great admirer of patent law, considering it the world's third most important historical development--after the United States (first) and the printing press (second).