The Easiest and Hardest Art Unit Groups at the USPTO

As you may know, we regularly publish rankings of the top patent prosecution firms. Even though our rankings are based on multiple variables, we always have a few commentators who point out that certain technologies are just harder to prosecute. This, of course, is true. It’s easier to get a plant patent than a business method patent. That’s why we decided to run the numbers for the various art unit groups at the USPTO. 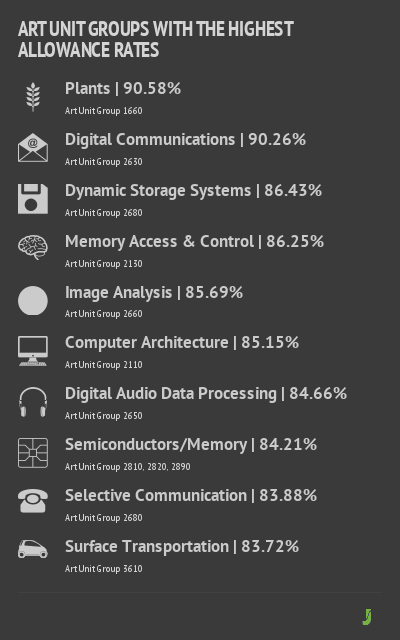 If you want a plant patent, you can probably get one. Art Unit Group 1660 has an allowance rate of 90.26%. That’s not surprising. Equally as predictable, Art Unit Group 3690 is the hardest group at the USPTO, clocking in at 11.01%. Go home Alice. You’re drunk.

Does this mean you’re doomed if you end up in one of the harder groups? Not at all. There are numerous tools available that help minimize uncertainty and maximize success at the USPTO. We live in the age of predictable patent prosecution.

Let’s say a microbiology application ends up in Art Unit Group 1630. That’s definitely intimidating at first glance. Only 49.67% of applications are allowed in that group. But what if you could avoid that classification altogether? That’s exactly why we built Juristat Drafting. Maybe you want to know which arguments previously worked on your examiner. Check out Juristat Examiner Reports. Perhaps you don’t need any help in this group at all! Show off your prowess with Juristat Business Intelligence. Juristat exists to make your life easier. Let us show you how.