Coke vs. Pepsi and Other Tales of Food and Beverage Patents 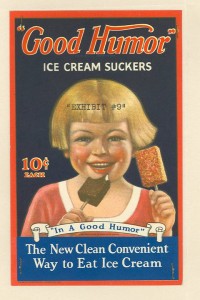 When thinking of patent battles, high-stakes litigation involving tech industry titans dealing with cutting-edge technologies comes to mind, like the most recent patent litigation between Apple and Samsung. These types of fights in the food and beverage industry are not quite so common or so public. However, it turns out that food and beverage companies hold large patent portfolios and battle each other for market dominance every day.
In the early 1920s, Harry B. Burt of Youngstown, OH, developed a frozen confection consisting of a rectangular block of vanilla ice cream coated with a sweet chocolate shell, into which he inserted a stick. He called his concoction the Good Humor Bar, and received a patent for it in October of 1923. Around the same time, Frank W. Epperson of Oakland, CA accidentally left a syrupy drink with a stirring stick in it outside on a freezing night, and by morning, the drink had frozen to the stick. Epperson later recreated this sweet accident, naming it the Popsicle, and received a patent for it in August of 1924. 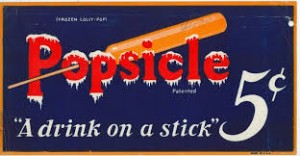 Burt, having received his patent first, believed that his Good Humor patent was broad enough to cover all forms of frozen concoctions on sticks and sued Popsicle for infringement in 1925. The parties eventually reached a settlement that split the market between Good Humor, which would have the rights to "frozen suckers or ice cream, frozen custard or the like," and Popsicle, which would pay a licensing fee to Good Humor and would limit its products to those "comprising a mass of flavored syrup, water ice or sherbet frozen on a stick."

Although the frozen treats industry has had its share of bickering, no consumer goods feud is quite as deep-seated, long-running, or polarizing as the epic battle between Coke and Pepsi. Originally formulated as a cure-all medicine, Coca-Cola was developed by John Pemberton in Atlanta in 1886. Pepsi, originally marketed as "Brad's Drink," was first formulated by Caleb Bradham in New Bern, NC in 1893. Since then, the two companies have battled it out for dominance in the American soft drink market. Unlike the frozen treats industry, the battle between Coke and Pepsi has been fought largely outside the courtroom, and litigation between the two companies has tended to focus on periphery matters like bottle designs and distribution methods rather than the fizzy liquids themselves.

Being large, multinational corporations, the Coca-Cola Company and PepsiCo have rather large patent portfolios. A few representative patents from each include "coffee and tea dosing system" (7798376), "process for making a healthy snack food" (7867533), and "beverage dispenser" (8479943). Given the stiff competition between these two companies, they are also eager to secure patent protection for any new food and beverage innovations they develop. 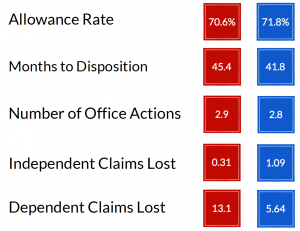 Using Juristat's data, we pulled the key patent prosecution metrics for both the Coca Cola Company and PepsiCo to see which company has the stronger patent prosecution practice (see figure below). Our data includes subsidiaries of both companies, including Minute Maid, Monster, and Energy Brands for the Coca Cola Company, and Frito-Lay, Quaker Oats, and Tropicana for PepsiCo. All numbers (except allowance rate) are averages.

A victory over a competitor in securing intellectual property protection does not necessarily lead to market dominance, however. The figure below compares the respective market shares of the two companies.  The data for the Coca Cola Company and PepsiCo includes all carbonated soft drinks produced by each company, while the data for Coke and Pepsi is restricted to each company's flagship product. All data is collected from the Beverage Digest, an industry publication that tracks soft drink performance in the United States. 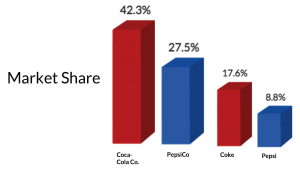 While Pepsi wins over Coke in patent procurement and prosecution, Coke is the clear winner among American consumers. While intellectual property protection is a vital component of innovation in all industries, the food and beverage industry is particularly susceptible to consumer preference in ways that other industries are not. And for two companies as iconic as Coke and Pepsi, with scores of passionate devotees on both sides, the battle for the tastes of the American public likely will rage on outside the courtroom for many years to come.