In 2016, the USPTO launched the Patents 4 Patients program to support the $1 billion National Cancer Moonshot initiative. In September of this year, the USPTO announced that the pilot program would be extended through January 31, 2023.

This is following a previous extension announced in June 2022.

A quick review of Juritstat data for immunotherapy art units (1641-49) shows that we still have a ways to go to meet that goal. While the time it takes for an application to reach an allowance or abandonment ( i.e., "disposition") has significantly decreased in recent years, the average months to disposition for applications disposed in the last five years is still 31.2 months. That is a far cry from the goal of 12 months or less. (Take a closer look at TC 1600 in our deep dive.) 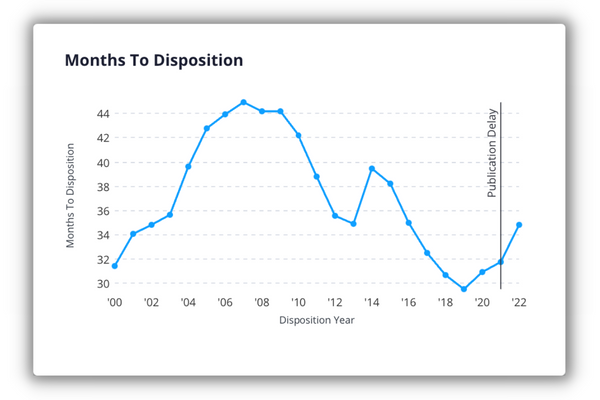 The details for participation in the program are as follows:

There are no restrictions on the applicant’s entity status — the program is open to individual inventors, universities, research institutions, hospitals, medical centers, government agencies, and large and small companies.

While the average time to disposition in the immunotherapy art units of TC 1600 is more than two years, savvy applicants may be able to shorten that timeline significantly through data-backed patent prosecution. Schedule a demo of Juristat to see how.