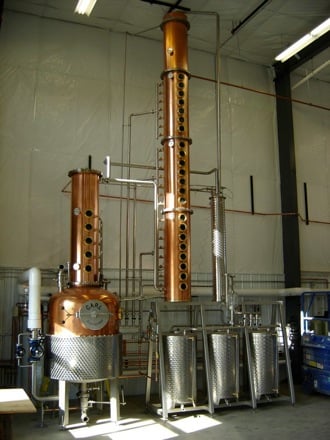 With St. Patrick's Day upon us, we celebrate the heritage of the Irish, but corned beef and funny green outfits shouldn't be the only things you remember about St. Patrick's Day. In fact, some of the world’s most important inventions and discoveries have actually come from the Irish. Below, we’ve listed some of the most important inventions and discoveries to ever make it off of the Emerald Isle.

In 1662, Robert Boyle, an Irishman and one of the original modern chemists, discovered that the volume of a gas is inversely proportional to the pressure exerted by the gas when held at a constant temperature. Simply put, when the volume rises, the pressure drops, and vice versa. If you’ve ever been scuba diving and have been warned to ascend to the surface slowly, you have experienced Boyle’s Law. This is because nitrogen gas is absorbed into your bloodstream on the way down; if you ascend too fast, the gas will expand in your joints and bloodstream, causing excruciating pain.

Aenys Coffey, an Irishman from Dublin, invented the world’s first widely used heat exchange device in 1830 and was grated UK Patent 5974. Coffey’s still improved upon Robert Stein’s 1828 still design by allowing a greater portion of the vapors to re-circulate into the still instead of flowing into the receiver with the spirit. The result eliminated the need for multi-distillation and produced a spirit with a higher proof and lighter character that is still used to this day by nearly every liquor producer in Europe and the Americas. Yes, we can thank the Irish for our strong spirits.

Harry Ferguson, nicknamed the “mad mechanic,” designed and built a new plough that was coupled to a tractor in a three-point linkage so that both formed a single unit. The Ferguson System revolutionized farming and is actually covered not by just one patent, but several patents that were issued between 1917 and 1939. The Three Point Linkage itself was patented in 1928 with UK Patent 320084 and is the simplest and only statistically determinate way of joining two bodies in engineering. The “mad mechanic” not only invented the revolutionary Three Point Linkage, but was also the first Irishman to fly in 1909.

During the Battle of Britain in World War II, many pilots were unable to escape their cockpits because the canopies could not open when they were damaged. With aircraft speeds rising to the point that they were breaking the sound barrier, manual escapes at such speeds proved impossible. Against this backdrop, enter Sir James Martin, who in 1945 invented the world’s first modern ejector seat. Claiming priority in the UK, US Patent 2,467,763 was filed in 1946 in the United States Patent Office.

Irishman Earnest Walton, in collaboration with John Cockcroft, ushered in the nuclear age by becoming the first person in history to artificially split an atom. Walton and Cockcroft built a particle accelerator in 1932 that bombarded lithium with protons, causing their nuclei to split, thus producing two alpha particles. By doing so, the pair had validated Einstein’s E = mc2 equation and successfully converted matter into energy. The particle accelerator device was subsequently named the Cockcroft Walton Generator and it was this research in the early 1930’s that earned the pair a Nobel Prize in Physics in 1951. This makes Earnest Walton Ireland’s first and only Nobel Science laureate.

This St. Patrick's Day, make sure to wash down your Guinness with some healthy knowledge on some of the world’s most innovative people, courtesy of Ireland.