Time to dive deeper into some of the key trends behind this year’s Top Firms rankings.

At the start of each year, we publish our annual rankings of the best firms in each technology center at the USPTO. Analyzing each firm’s allowance rate, number of office actions before allowance, and count of applications filed, these rankings take both performance and volume of work into consideration.

Some longtime followers may recall that Juristat used to publish a single list, the “Juristat Top 100.” While perhaps more straightforward, we knew that a single list didn’t recognize the nuances within patent prosecution, nor did it meet the needs of businesses looking to find expertise in a specific field.

And so, starting in 2019, we relaunched the rankings to focus on technology-specific expertise rather than general aptitude across the entire USPTO. You can explore the final rankings and learn more about our methodology here. In this post, we want to dive a little deeper into some of the numbers behind this year’s rankings.

Here are six key trends we uncovered in the 2021 Top Firms rankings. Dig deeper into the trends here, or scroll down for an at-a-glance infographic.

1) 110 firms earned a spot on our rankings this year

At 110 unique firms, this is our most diverse listing yet. In 2019, we saw 105 firms rank in at least one technology center, and in 2020, that number grew slightly to 106 firms. It’s important to remember the ranking here is based solely on performance metrics. More firms earning a spot in our rankings is an indication of the increasing quality (and competition) in the market.

2) 66 firms have ranked three years in a row

This being the third year for these technology-focused rankings, we want to recognize the 66 firms that have appeared on the lists three years running. Patent prosecution can seem like an unpredictable business, but these firms have demonstrated consistency year after year.

Fish & Richardson’s exceptional allowance rate, average office actions to allowance, and filing volume has propelled them to a spot on each of the eight technology centers we analyzed. Even more impressive? This is the third year in a row that the firm has achieved that honor.

Though Fish & Richardson didn’t earn the number one rank on any of the lists this year, the firm did rank consistently high, most notably in TC 1700 (ranked #2) and in TC 2400 (ranked #3).

Not to be counted out, Foley & Lardner and Kilpatrick Townsend ranked in seven of the eight technology centers; Schwegman, Lundberg & Woessner and Knobbe Martens appeared in six. These rankings represent the best of the best in patent prosecution, and the metrics for these firms prove the firms’ commitment to well-rounded, consistent practice.

CLICK HERE TO SEE THE 2021 RANKINGS:
Top Patent Firms in Each Technology Center

Speaking of consistency, in six of the eight technology centers evaluated, the top spot remained the same this year.

While the previous points suggest that much of the list remains consistent year-to-year, there are a number of newcomers to the rankings this year. In our three years ranking the top firms by technology center, this year marks the first time these 24 firms have earned a spot. Their emergence on the list proves the value of regular firm review and performance evaluation to find the best of the best. 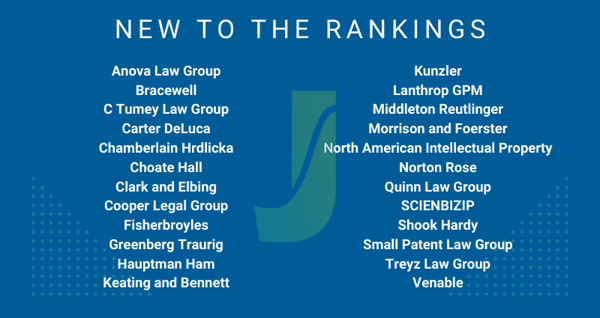 The 110 firms on our rankings earned their spot through exceptional performance – not through a call for participation or hefty entry fee. Just as we rely on data to objectively rank the top firms, modern patent firms (and the clients that hire them!) rely on analytics to make strategic, data-driven decisions. And with data from more than 10 million pending, abandoned, and granted patent applications, Juristat is the most robust patent analytics platform available. Curious to see how Juristat can revolutionize your patent strategy? Let’s take a look.

A Patent Perspective on CES 2022