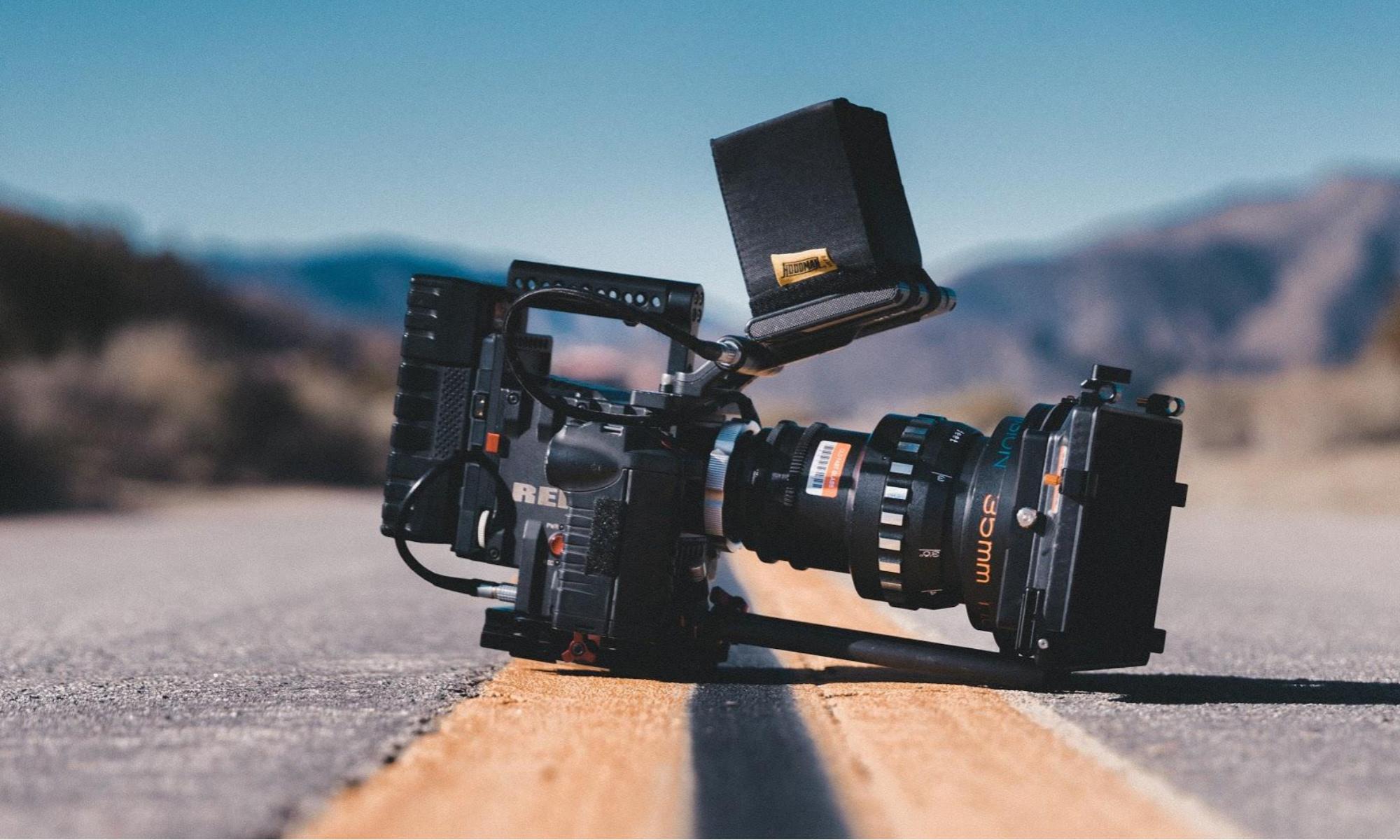 On Sunday, February 24, film fans, pop culture fanatics, and all of Hollywood’s brightest stars will tune in to the live broadcast of the 91st Oscars ceremony. With eight movies nominated for best picture, from the bombastic Queen biopic Bohemian Rhapsody to the devastatingly poetic Roma, the ceremony is guaranteed to be star-studded, ornate, and maybe even a little unpredictable.

The “motion picture” has always been at the intersection of innovation and entertainment, bringing together audio, visual, and editing technologies in a constantly evolving attempt to thrill the masses.

From the early breakthrough of the Lumiere brothers' Cinématographe shows in Paris in 1895 to the release of the impressively photo-realistic space odyssey Gravity in 2013, filmmaking has piqued the imagination of many. It only makes sense that the industry has a lot of patents contributing to its ongoing evolution.

Let’s take a look at some of the most influential technological discoveries that have shaped filmmaking into one of the most important tools of communication and entertainment.

A timeline of major film innovations

1878: The first motion sequence photographed in real time, rather than a series of posed photographs, was created by British photographer Eadweard Muybridge. He photographed a horse named Sallie Gardner in rapid motion by using a series of separate still cameras. (Image Source)

1892: The first animated projection was created in France by Charles-Émile Reynaud, a French science teacher. On October 28, 1892, he projected the first animation in public, “Pauvre Pierrot”. His films were not photographed, instead drawn directly onto the transparent strip.

1893: At the Chicago World's Fair, Thomas Edison revealed the Kinetoscope to the public. The coin-operated machine was contained within a large box, and images could be viewed by one person at a time by looking through a peephole. (Image Source) 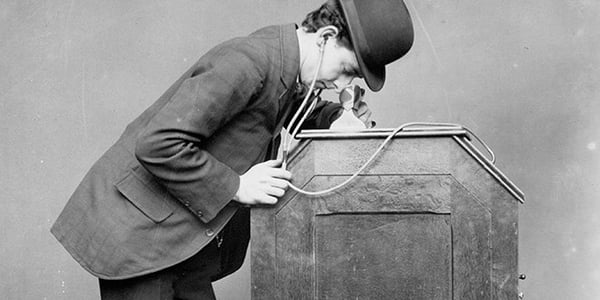 1900: British film pioneer William Friese-Greene filed a patent for a 3D-film process. In his patent, two films were projected side-by-side on a screen. The viewer looked through a stereoscope to converge the two images. Because of the obtrusive mechanics behind this method, theatrical use was not practical.

1902: The first person to demonstrate a natural-color motion picture system was British inventor Edward Raymond Turner, who received a patent in 1900. Two years later, he was able to show promising but very mechanically defective results.

1908: During the 1890s, Thomas Edison owned most of the major US patents relating to motion picture cameras. Exhausted by constant lawsuits, his competitors negotiated a licensing deal. Many independent filmmakers responded by moving their operations to Hollywood, whose distance from Edison's home base of New Jersey made it more difficult for the patents to be enforced.

1927: Warner Brothers releases The Jazz Singer, which was mostly silent but contained what is generally regarded as the first synchronized dialogue (and singing) in a feature film.

1973: The sci-fi classic Westworld, the predecessor to the popular HBO show, had the first use of 2D computer animation in a significant entertainment feature film. The point of view of Yul Brynner's gunslinger was achieved with raster graphics, a rectangular grid of pixels with each pixel's color being specified by a number of bits. (Image Source)

1975: Futureworld, the sequel to Westworld, featured the first use of 3D CGI in a live-action film. The segment was a very brief, computer-digitized 3D representation of the animation of a hand and face. (Image Source)

2004: Sky Captain and the World of Tomorrow becomes the first movie with all-CGI backgrounds and live actors. Later in the year, The Polar Express becomes the first computer-animated 3D film to be created with motion capture. (Image Source) 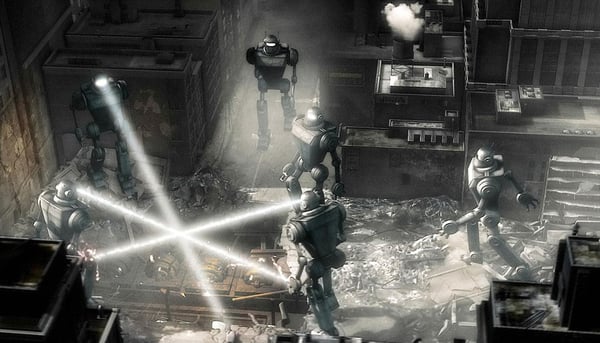 2007: Netflix announces that it will launch a streaming video service. With more competitors entering the DVD mail order industry, the impending death of the company was predicted late in 2002. And look how far we’ve come.

The film industry is defined by innovation, pushing the boundaries of how to shape content. Viewers are starving for something new and cutting-edge, and movie studios, film professionals, and media companies hope to be the discoverers of the next generation of attention-grabbing tech.

We turned to Juristat Platform to take a look at disposed patents related to the film industry, as well as highlight some pending applications that reveal potential new approaches to the world of entertainment.

Sony and Samsung lead the industry in number of applications, both in overall number of disposed applications and pending applications. Microsoft and Panasonic seem to have a smaller focus on these types of patents than they once did, with only 88 and 84 applications currently in prosecution, respectively. Intel and Qualcomm's increased interest in these applications corresponds with the mobile revolution in content delivery.

In related news, Sony recently filed for patent protection of the animation process and technologies used to produce the 2018 blockbuster Spiderman: Into the Spider-Verse. With the vivid animation inspired by retro comic stylings and Pop Art icon Roy Lichtenstein, Sony claims the innovations of the film go beyond stylistic originality or envelope-pushing success and qualify as a distinctly new invention. (Image Source) 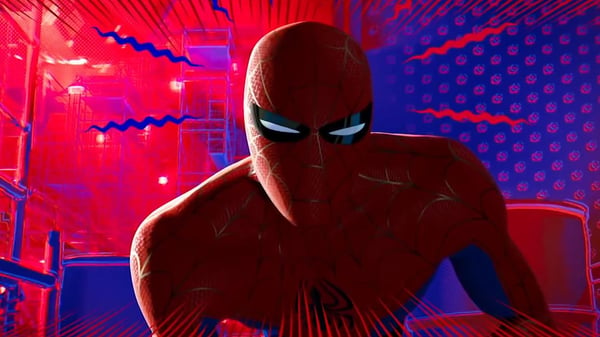 The house of the mouse: Disney’s hold on the market

When doing a historical deep dive into the history of film-making, you can’t ignore the impact of Walt Disney Studios.

But the behemoth is even more relevant today thanks to the US Justice Department agreeing to a settlement that will allow Disney to purchase most of 21st Century Fox's assets. Not to mention, the top three box office hits from 2018 all belong to Disney. 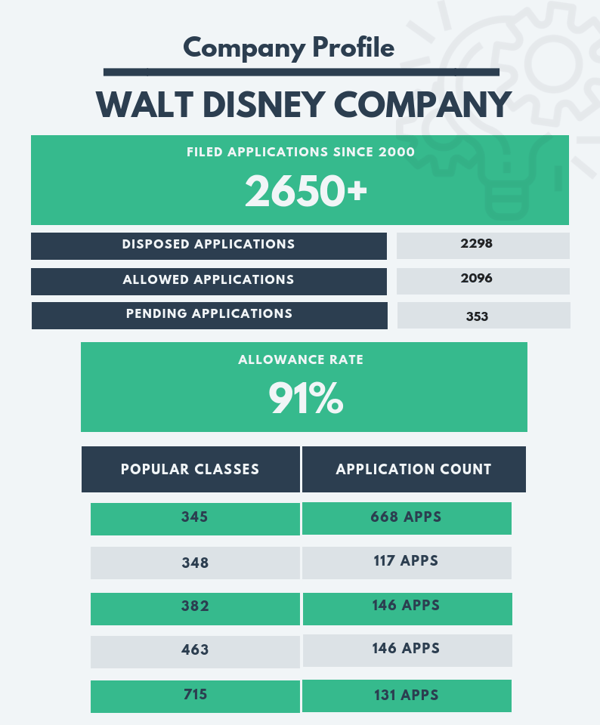 Disney’s patents are as diverse as their business holdings and extend well beyond film – from the simulation of a hair in a distributed computing environment to a roller coaster that deviates from its path depending on how scared you are. And with 353 pending apps, they show no signs of slowing down.

Keeping up with industry leaders

As a cornerstone of global entertainment, the film industry has had to consistently up the ante with impressive and never-before-seen technologies. From computer-generated effects to new distribution techniques, film studios and streaming services alike continue to excite the masses with new sights and experiences. Patenting has shaped the industry as we know it.

Monitoring emerging technologies or the performance of industry leaders like we have here is easier than ever, thanks to Juristat’s sophisticated algorithms, comprehensive filtering, and saved searches.

Are you part of an in-house team hoping to understand trends to shape an effective patent portfolio? Or maybe you’d like to see how your own company compares with other competitors in your industry? Access valuable analytics and leverage your competitive intelligence with Juristat. Sign up for a demo today.

Which Firms Are the Best at Overcoming Alice?